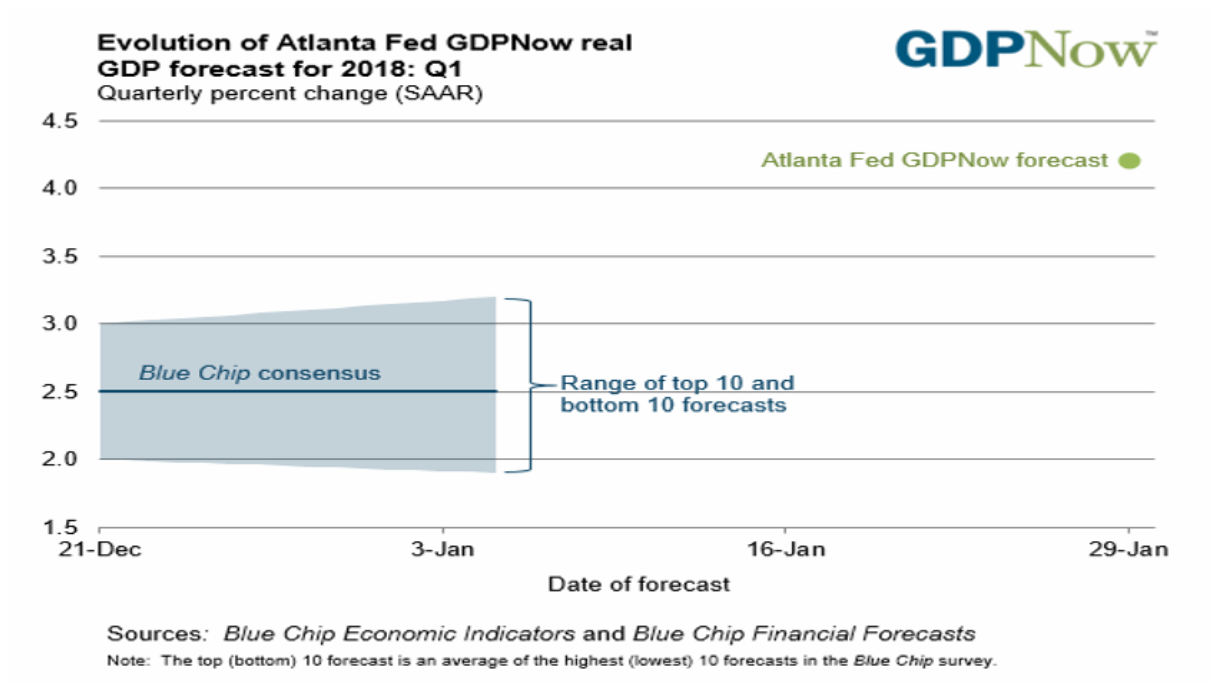 Sure, we had a good laugh when Trump claimed he could raise US economic growth above 4%. Maybe our reaction was a bit premature…?

Although it didn’t appear on the front page of the international newspapers, in 2017, the Eurozone beat the US for the second year running in terms of growth. While I admit we should really wait for the final figures to come out, based on the preliminary estimates, in the US, the growth rate didn’t make it above 2.3%, compared to 2.5% on this side of the pond. It may not seem like such a big difference, but if you take the Eurozone’s aging population into account, it’s hard to deny that Europe is currently doing a bit better than the US.

It’s a difference no one would likely lose any sleep over, if it weren’t for President Trump sounding off so much about it during his campaign. He claimed that if elected, he would breathe new life into the US economy and that sustaining growth of 4% − or even higher − was not outside the realm of possibility. Which didn’t seem all that realistic. The graph below shows the average real growth of the US economy over a period of ten years, with the red line indicating the 3% mark. As you can see, only in the 1960s was a level of 4% achieved for an extended period of time. An important difference compared to today is of course population growth, which was about 2% between the 1950s and 1960s. Assuming the figure is currently 0.5%, productivity would need to see structural growth of 3.5% in order to achieve 4%. And the idea that you can get there with tax cuts − no matter how historic they may be − is highly questionable.

3% was the benchmark growth, 4% is pretty unlikely

And then came the Atlanta Fed’s first forecast, which features as this week’s graph. I have written about this graph on several occasions (see here and here), but basically, the Atlanta Fed’s GDPNow indicator shows US economic growth during each quarter, based on GDP statistics. In other words, if you look at 26 March, the GDPNow indicator estimates GDP growth in the first quarter based on all data publicly available at that time. But remember, it is and remains an estimate: in the end, the actual GDP figures can certainly still deviate from the Atlanta Fed’s latest forecast. In practice, however, its estimates have proved fairly reliable and are, for that matter, more accurate than the consensus forecasts arrived at by other economists.

So what does the Atlanta Fed’s first forecast for Q1 2018 show? That’s right! 4.2%! So now who’s laughing…? Maybe his crazy tax reform plans weren’t so crazy after all?

Unfortunately for Trump, this first forecast isn’t actually all that meaningful. For example, the first forecast for the third quarter of 2017 was 4.0%, while real growth ended up being 3.2% and in the first quarter of that year, when the prediction was even higher − 4.3% − the actual figure was 3.1% Of course that’s not entirely surprising: when the quarter’s only just started, there aren’t many January figures available, so a lot of weight is given to a relatively insignificant (weekly) figure. Only once the monthly figures have been published (which usually doesn’t happen until mid-February), is there a bit more to work with. Then the prediction becomes more reliable.

As it turns out, The forecasts are often − though not always − adjusted downwards during the course of the month. Of the 15 quarters in which GDPNow has been live, eight of the figures ended up lower, four were about the same and only three were higher than the original estimate. You can also look at how the forecast changes over the quarter; below I’ve divided the 15 observations into three subgroups: those with high starting values, those with low starting values and those that were somewhere in between. A significant downward adjustment appears to be particularly likely when the forecast starts out high.

The first forecast doesn’t tell us much

Now, it’s possible, of course, that this first quarter will be the exception to the rule. The US economy seems to being going full steam ahead now and with the added effect of tax cuts, who knows what will happen. But that doesn’t mean Trump will be right. After all, one quarter does not make a 4% summer: he said it would be a sustained increase. It remains to be seen whether he can make that happen, but to be honest, I’m not really holding my breath.

Incidentally, a new update will be published today, so we will soon see whether 4.2% has proved realistic in this case, too.