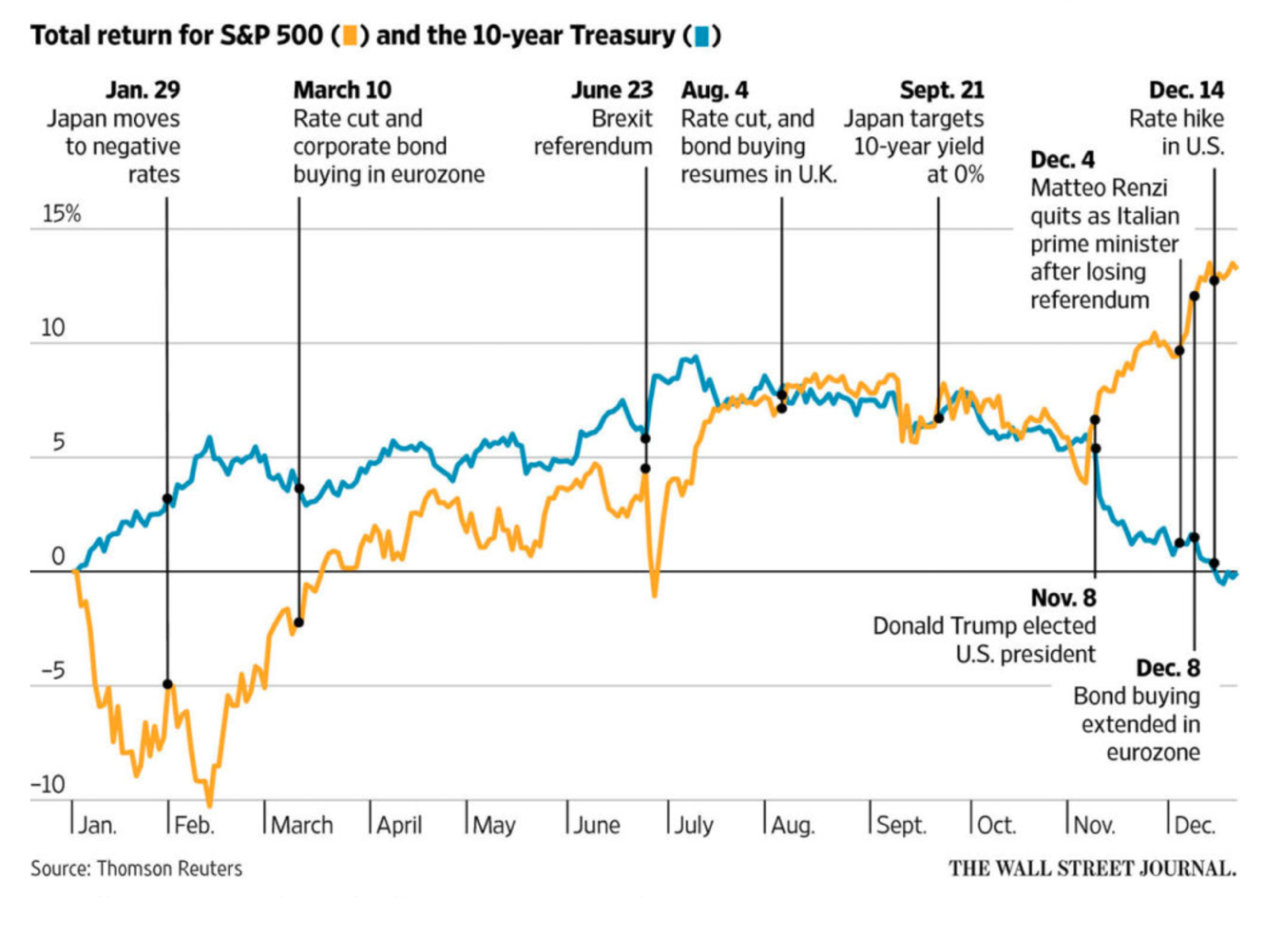 Trump’s win has caused plenty of commotion on financial markets over the last two months. Expectations of lower taxes have given US stocks wings, while capital-market rates have risen fast. Is that all down to The Donald?

When the earth woke up on 9 November to the news that not Clinton, but Trump was to be the next US President, worldwide stock markets initially panicked. The Nikkei closed some 5% lower, Europe opened 3% in the red and even US futures took a sharp dive. However, the sell-off didn’t last for long, as once Trump had given his acceptance speech, sentiment turned and all losses were recovered in short order. Or at least losses on equity markets, as bond markets took a beating on that infamous day, with 10-year capital-market rates rising 0.2% points (20 basis points). The hope of one market (equities), turned out to be the fear of the other (bonds), something which we see clearly in this week’s graph. Right up to the day of the elections, investment returns in US equities and bonds were rising together, but in the six weeks that followed, we saw a gap appear of over 12%.

The developments on bond markets are readily understandable, as I previously demonstrated here. Although we really do not yet know precisely what Trump’s policies will look like in concrete terms (he had a great many talking points), pretty much all policy variations are negative for bond markets. Tax cuts and major infrastructure projects must be funded, which will in all likelihood result in a bigger government deficit and thus greater outstanding debt. What’s more, stimulating an economy with an already tight labor market will probably lead to higher inflation, something you’re also going to get if you implement import tariffs. Bigger debt burden, higher inflation, the Fed raising interest rates: no doubt as to why bonds took such a beating. By the way, I’m not saying he’s going to do all this – I’ve also found myself in nervous anticipation of the concrete details and feasibility of his policies – but whatever direction he chooses, it’ll be bad for bonds. The optimistic interpretation that equity markets have favored for the Trump victory is to my mind rather more ambiguous. Naturally, tax cuts will translate directly into higher net profits, but if it descends into a trade war, that will of course be far from favorable. Rising inflation, higher financing costs, higher wages: these are all issues that put profit margins under pressure, so the enthusiasm on the markets is not that easy to explain. That the European market has also risen some 10% since the US election is difficult to explain in light of Trump’s plans: he’s not going to be cutting European taxes too, is he?

However, there is an alternative explanation for the enthusiasm of equity markets and it’s got nothing to do with Trump. If you’d been paying attention to the macro data in recent months, it will not have escaped your notice that the economic momentum of the different regions has clearly accelerated. The graph below, originating from Goldman Sachs, shows for instance that the activity in the US, but also in Europe, has been recovering since half way through the year.

This could have been the Clinton rally…

We get the same picture if we look at the Citi Surprise Index, the index that shows to what degree published data surprises or disappoints consensus expectations. The regional distribution of this index shows that for the first time in a long period, economic data from all regions has on balance managed to surprise the market positively. Growth is recovering, unemployment is slowing faster than thought, and confidence is recovering for a change. So even if there had been no elections, we would have seen a scenario of equities doing relatively well.

Economic momentum has been recovering for months

By the way, I don’t think The Donald will be bothered much by any of this. When it was announced at the end of December that US consumer confidence had risen, he didn’t waste any time in congratulating himself. Thanks Donald! I don’t think there’s much point in me mentioning here that consumer confidence has been rising since May. The reaction from the fictional character Francis Underwood from the series House of cards speaks volumes in that regard.