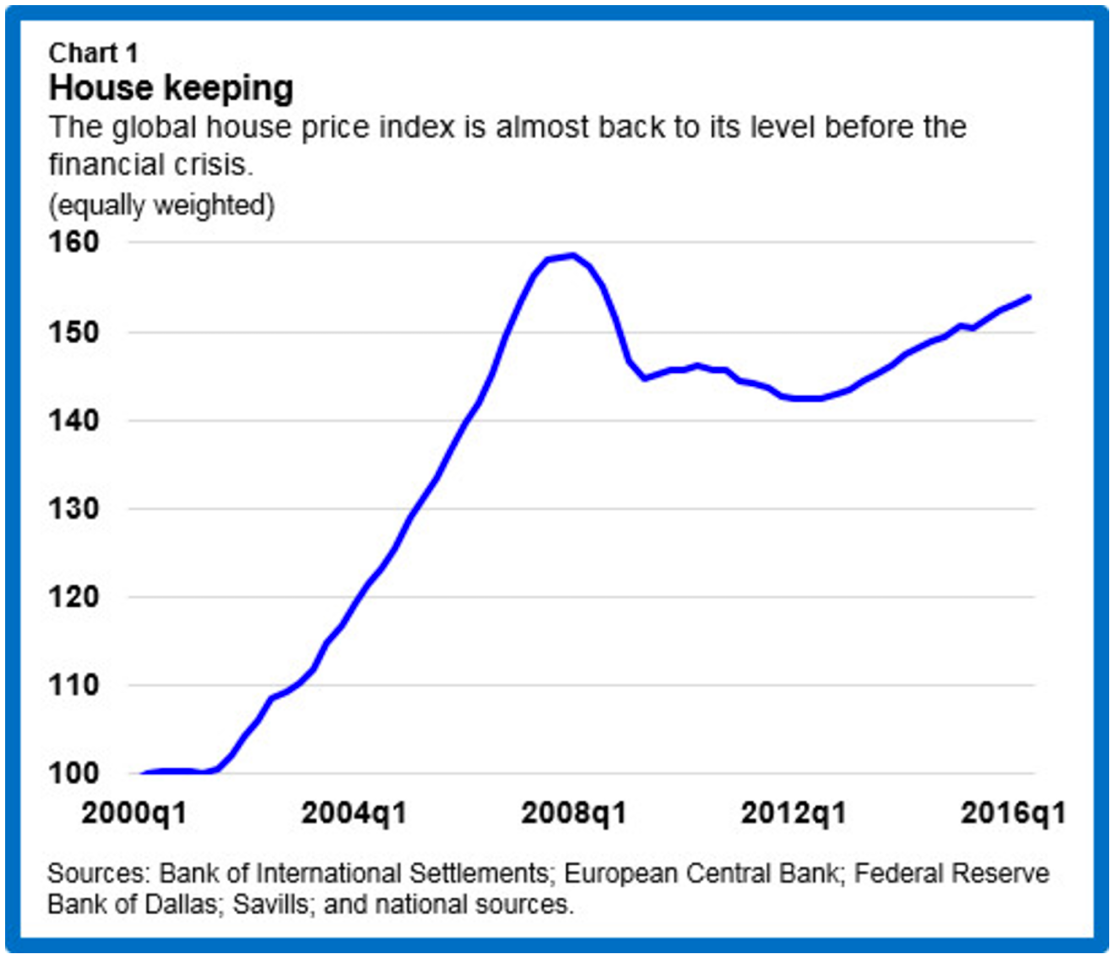 Just when the economy worldwide finally seems to be picking up momentum, the IMF starts worrying about a bubble in the global housing market again. But are their fears justified?

Before I tackle this issue, first another question that is probably just as significant: are house price bubbles things that should worry us anyway? This I can answer with an emphatic yes: housing bubbles are a major issue. It is true that the housing market only makes up a small part of total economic activity, but its indirect impact is much greater. Purchasing a house is only a small part of the whole process, which also involves buying a whole range of products and services. Take, for example, legal services and bank products, everything from removal firms to companies selling new kitchens and couches. If you consider how often new owners attempt to remove every trace of the previous inhabitants by putting in new floors and bathrooms, it is evident that the economic impact of the sale of a house is a lot greater than the transaction alone.

Furthermore, buying a house is often your biggest expenditure as an individual – one that almost always puts you seriously in debt. This need not be a problem in itself if the housing market is stable and you have a steady job, but it can all go horribly wrong if economic growth suddens disappoints. After all, the value of your debt doesn’t decline. And if you are then forced to sell your house, you can be saddled with a hefty negative equity burden. That prospect alone can have a significant dampening effect on consumption expenditure. On the other hand, if house prices are on the up, the excess value is sometime used to finance building work, like an extra dormer window.

There is sufficient confirmation in academic literature to confirm that this is more than just an anecdotal link. Here cause and effect are often blurred: does economic prosperity boost housing demand, resulting in higher prices, or do house prices rise, increasing capital levels and causing higher consumption? Both processes occur and that creates a pretty high correlation between economic growth and real house prices. The recent graph shown above is from the OECD website and clearly shows that historically there has been a clear link between growth and real house prices.

So in that sense we should try to prevent a housing bubble, but are we in such a scenario already? This question was posted on the IMF’s blog recently and the answer was, to a large extent, ‘no’. Of course, real house prices have risen in recent years and are now approaching the record levels seen in 2008, but there is no real bubble yet. In contrast to the 2000-2008 period, real house prices have risen much more gradually this time and there is a far greater regional dispersion. In order to make that easier to visualize they have divided the global housing market into three different groups, as show in the graph I have reproduced below.

The first group comprises those countries that haven’t actually experienced real price declines and where house prices in real terms have risen by 40% or more in the last ten years. These are the countries that are highest on the bubble list. For example, Australia (+40%), Austria (+40%), Canada (+50%) and Hong Kong (+120%). The second group are those countries where the bubble burst in 2008 and where a gradual recovery followed from 2012 onwards. The most obvious example here is the US, but Germany and the UK also belong to this group. Finally, the last group is made up of countries where there is no sign of a convincing recovery yet. Such as Spain, Finland, Italy, China and… the Netherlands! So even though we hear optimistic noises about rising house prices along Amsterdam’s canals and the surrounding area, if you look at the broader housing market in the Netherlands, it’s still very early day in terms of recovery, according to the IMF.

The price increases are not broad based. And in areas where the market has moved higher, the boom countries, it is more a case of too little supply than strong (debt-driven) demand. Moreover, the IMF also indicates that policy changes have been implemented in many countries in order to prevent people from obtaining financing too easily. Of course it is possible that local (Amsterdam canals) or regional bubbles have developed, but the situation in the global housing market is not really too much of a problem as yet.

I was also interested to see how price movements of the Dutch (Gloom) housing market would look compared to those of Belgium (Boom) and Germany (Bust and Boom). After a few clicks on the website I came across the place where I could download an Excel spreadsheet containing the underlying data for these three counties.

The graph was not what I imagined: the ‘Boom’ of Belgium is more of a straight sideways line, while the ‘Gloom’ of the Netherlands actually ended three years ago… In short, it made the IMF’s three-way split seem somewhat subjective. Having said that, it does not really affect the conclusion.