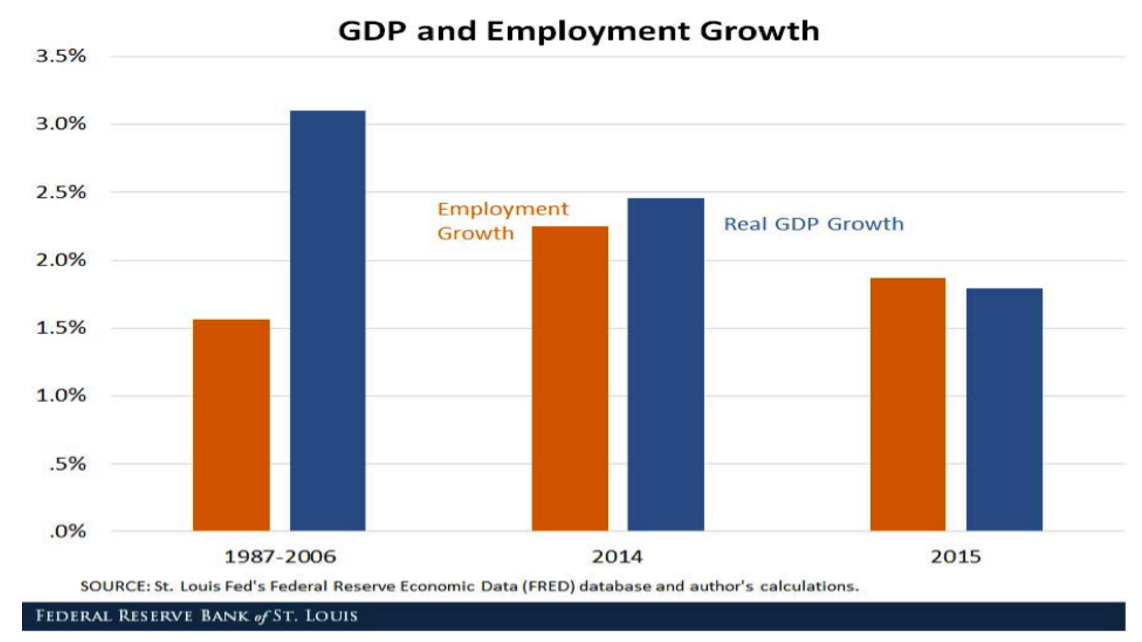 We can look at today’s graph from three different perspectives and come to three pretty different conclusions.

Let me start by saying that this graph is not entirely honest. It shows the ‘link’ between the growth of the US economy and employment growth. Nothing wrong with that, but the data on the left cover a period of twenty years while those on the right cover just two individual years. By using the data of two individual years, there is always the risk that what we observe is little more than a temporary blip, rather than a structural change.

In order to dispel that myth, I carried out a check, presented in the second graph. The left side is the same as in the first graph, but the one on the right now gives the averages for the period 2010-2015. There is still a difference in the length of the period being analyzed but there will be less of a ‘blip factor’ in the second graph. What is apparent is that the link remains: we have comparable job growth (1.6% in the last five years versus 1.5% in the 20 years before the Great Recession) with lower GDP growth (3.1% versus 2.0%).

Positive….
Initially the message appears to be relatively encouraging. Why should we worry about low growth? Apparently it doesn’t really matter much how much the economy grows, as far as employment is concerned the engine just keeps on ticking over nicely. Given the fact that, from an individual’s perspective, having a job is more important than the growth of the economy as a whole, this is good news isn’t it? You can also turn it around: if there had been a fixed link between employment and GDP growth, the slower growth we have experienced over the last five years would have led to much lower employment growth, and all the associated misery. Thank goodness that these two things do not always go hand in hand!

…negative…
That’s the positive interpretation. There is a more negative one, though: the weaker correlation between GDP growth and employment is actually very bad news. The difference between the orange and blue columns actually shows the economy’s labor productivity, the extra growth resulting from the fact that we have become more efficient in terms of production. An extra job used to lead to a lot more economic growth in the past than it does now.

Is this a something to worry about? Well, yes. For example, China’s rise to superpower status is not so much thanks to strong jobs growth – although that has certainly played a role – it is far more related to the strong productivity growth in the country. Improvements in productivity lead to greater efficiency and generally mean that there is more wealth to be shared out. If productivity stops improving, this wealth stops growing too with all the consequences that this brings with it. Reduced productivity growth also raises the question of whether we haven’t already reached the limits of our growth potential and should start assuming that growth rates will be structurally lower. That in turn has major consequences for the extent to which debt can be paid and debt burdens sustained, the extent to which people want to invest (why invest in an economy that is scarcely growing?) etc. The best way to show this is by looking at the development of GDP per capita, which is seen as the measure that indicates the long term trend in a country’s wealth.

…or something else?
There is a third possible interpretation. This chart compares apples with pears. On the one hand there is job growth, which at least on paper is a relatively easy thing to measure: you add the number of jobs in year one, the number of jobs in year two, correct for part time jobs and then you’re done. Ok, some jobs are quite different to others and that will create some statistical noise, but that is nothing compared to the problems relating to the other yardstick – GDP. This is a statistical measurement that attempts to indicate a country’s total output. This is not too difficult in the case of the amount of bread sold or bicycles produced, but measuring a large proportion of the rest of the economy is based on rather subjective assumptions. How can you calculate the productivity of a teacher and what exactly is the added value of an investment strategist? Civil servants are included in GDP calculations on the basis of their salary, while the ‘production’ of the banking sector is often determined by looking at the difference between long and short-term interest rates. An increasingly large part of the economy is related to the services sector – an area for which it is not that easy to make calculations. An additional problem is the adjustment required to convert nominal figures into real GDP – something that opens a whole new can of worms. How can you compare a smartphone with an old mobile phone, or a fixed line phone for example? You can easily question whether GDP is still up to the task of measuring underlying economic growth. If you take that line of thinking, the fact that something that can be reasonably easily measured like job growth is so stable might also imply that calculating GDP gives ever-increasing distortions.

Three interpretations. Good news that employment growth remains buoyant, bad news that productivity is stalling and lastly – perhaps we should think about doing away with GDP altogether.

It’s up to you which you choose.