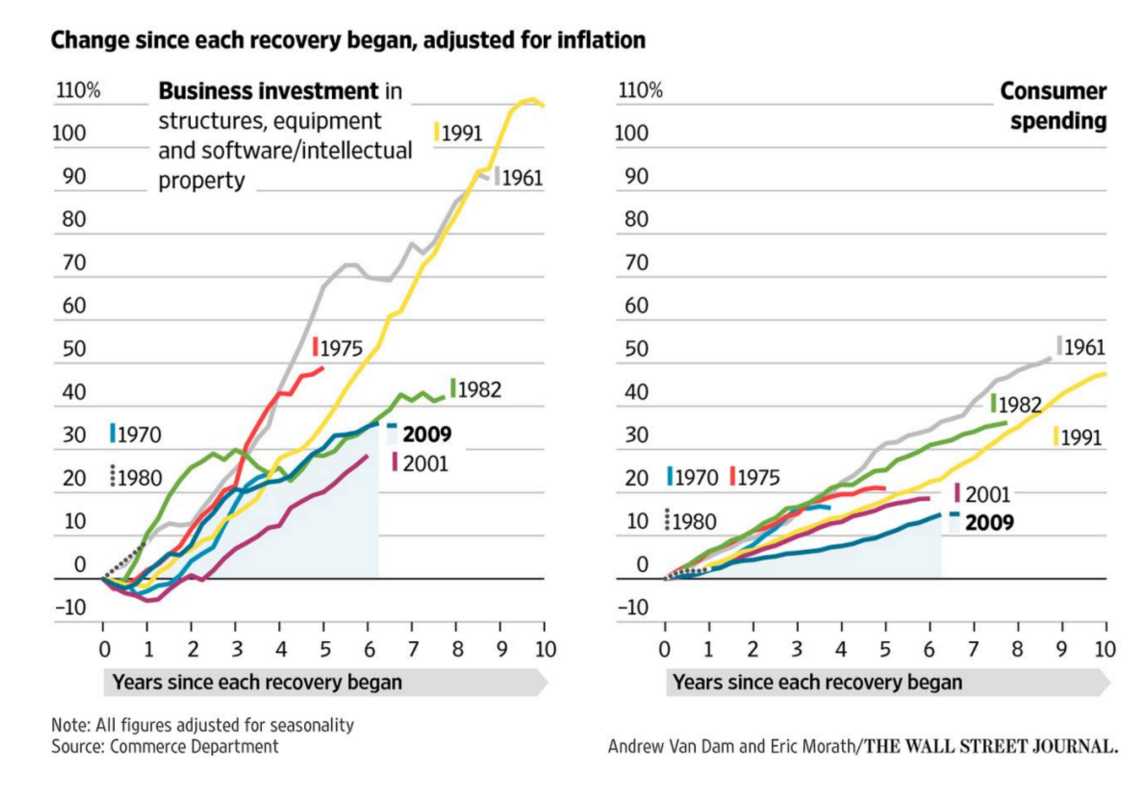 Today a graph that simply looks great. And that raises a question.

A visually appealing, simple graph from the Wall Street Journal. Well, graphs actually, as there are two of course. Both were generated using data originating from US GDP statistics, published every quarter. GDP, if you didn’t know, can be broken down into different spending categories. These include consumption, investment, government spending and the external sector. Consumption is the largest of these factors, especially where it concerns developed economies. In the US for example consumption is currently 68% of total GDP, with investment accounting for no more than 16%.

Both of these spending components are shown: left investment, right consumption. The series have been further subdivided, showing the growth rate of both spending categories during expansion phases; in other words, not during recessions. The starting point is therefore always the start of the recovery phase in the economic cycle.

And this immediately raises the question: why after all those years is investment not much higher than consumption? Even with a significantly lower starting value, at a certain point you’d expect continuing higher growth to be expressed in more investment than consumption. The graph below, which shows investment as a percentage of total GDP (the investment ratio), clearly illustrates that this was not the case.

The answer to this question is of course obvious: yes, the pace of growth is higher during expansion, but take a look at what happens during recessions… Sadly, my graph is not quite as attractive as the Wall Street Journal’s, but I think the message is clear.

Investment can decline significantly during recessions. The contraction during the last recession was extremely pronounced, partly related to the strong correction in the housing sector, which in the US is included under investment in the GDP statistics. But consumption decreases too during recessions, although this usually remains limited. So in that phase there is a significant correction in the increased importance of investment in the overall economy.